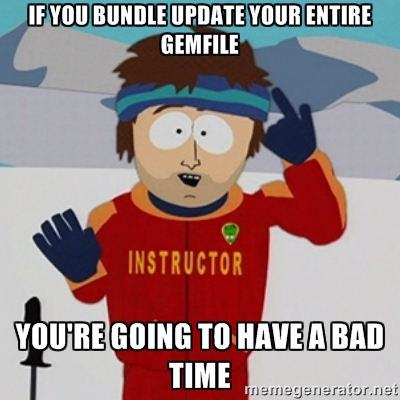 On any reasonably sized production project, you should absolutely never update all outdated gems at once. There are new versions of gems being released daily and each time you update your bundle, you’ll be pulling in changes (and bugs) from your dependent gems along with all of their transitive dependencies. For example, on my current application, running bundle update pulled in 52 updated gems. Talk about a risky release!

To help mitigate the risks associated with blindly updating all of your gems, I wrote a small Ruby script to only update a subset of gems at once. With this script, I can cherrypick a few related gems and release them in a smaller batch and feel much more confident about what changed and what needs to be tested.

After using this script over the past year, I finally decided to wrap this utility into a reusable gem. Now, introducing the cleverly named bundler-updater gem! The bundler-updater gem will examine your Gemfile for all outdated dependencies and then interactively prompt you for which gems you would like to update.

It’s simple and a huge timesaver compared to manually running bundle update each_individual_gem over and over again. Drop me a line if you find it useful or if you have any suggestions!

NOTE: It’s usually quite safe to bulk update non-production/test dependencies and it would be a nice enhancement for the bundler-updater gem to support updating all gems a specified bundler group.